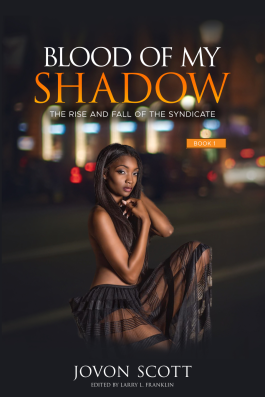 “Blood of my Shadow: The Rise & Fall of the Syndicate” will be released as an ebook and paperback in approximately four weeks.  As I’ve mentioned before, the author, Jovon Scott, is an inmate who I met while researching my last book, “Supermax Prison:  Controlling the most dangerous criminals.”  Jovon sent me several pages of his manuscript written in the urban novel/street lit genre.  Since I consider myself to be a writer of creative nonfiction, this has been an interesting venture for me.

Jovon’s imagination shines through his writing like a flood light on a dark night.  One might say that I was hooked.  I edited 50 pages of the manuscript and waited for his response.  Jovon was excited about working together — Jovon as the author, and I as the editor.  Our efforts gained a contract with “History Publishing Company” out of New York.

I’m including the verbiage from the back of the book.  Hope you enjoy.  This is book one of a six book series.

The Syndicate lives by a set of rules and principles that not only govern our longevity in the underworld, but shapes who we are as a player in the game of chances.  Death is synonymous with the culture we live in; blood is only repaid in blood.  We are Penumbras, mere fractions of a shadow.  But when united, we become one full and complete shadow, absorbing the magical and spiritual strength emulated by a total eclipse.  And when Penumbras die, they become the Blood of my Shadow.
Mona Moore, Sole Proprietor of the Sheridan Syndicate.
***
It was in a 6 x 9 foot cell where the author, Jovon Scott, discovered how writing frees the soul and  opens a breeding place for creativity.  This is a work of street lit, focusing on the underbelly of urban culture.  It is here where the author combines lessons learned on the streets of Chicago, an unharnessed imagination, and an ability to spin an exciting story.  Blood of my Shadow is a narrative about control and power, accompanied by sex and violence, a lustful lifestyle, the willingness to die for a cause, and the hope of a lasting legacy.

3 thoughts on “Blood of my Shadow: The Rise & Fall of the Syndicate”